Confession: I have felt like a bit of a phony for a couple of weeks now, after releasing the Sterling Shorties and Leggings pattern, the first Tie Dye Diva pattern for knit fabrics. You see, right there in the section titled “Tips for Sewing with Knit Fabric”, alongside zigzag, triple stitch, stretch stitch and coverstitch, I glibly throw in “twin needle” as an option for a nice stitch to use on knits that will stretch along with the fabric.

I have never used a twin needle.

I know!! I have excuses of course. I have a coverstitch machine and I love it. Also, I have only recently started to really enjoy sewing with knit fabric. And … OK, the 17 steps in my sewing machine manual, the forked needle, and that big prongy plastic thing kind of scared me.

No more excuses. Here I go, real time, as real time as possible on a blog, with actual photos of my actual first time using a twin needle (also known as a double needle). Fingers crossed! 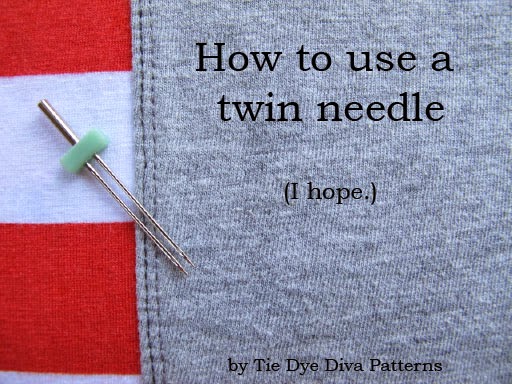 I am doing this on my Brother because they are widely used, and because with 17 steps in the manual before getting to “Start sewing”, how could I go wrong? 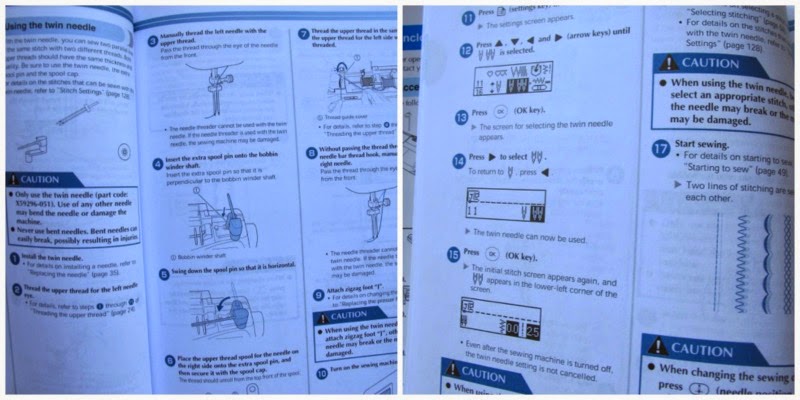 The pre-manual step 1 for me was find the twin needle and prongy thing, which now I know is also known as the extra spool pin.

In the spirit of keeping it real, here is the bin where I throw store things like extra serger cones and sewing machine accessories that scare me a little.

Step 1, install the needle. Easy! If you look at the top portion you can see it’s just like any regular needle, with one shank and a flat side. Insert, flat side in back. Thread the machine with the top thread going through the left side like any other needle. I’m not even going to post a picture because you know what a threaded machine looks like. Steps one and two, I conquer you!

Now, put the no-longer-scary extra spool pin on the bobbin winder shaft and swing the pin around so the spool will be parallel to your top thread spool. This part varies by machine, some machines just have you stand the second thread upright on a pin. Put the spool on – important part coming up – with the thread coming from the top of the spool. This is because your regular top thread spool unwinds from the bottom, and you want them unwinding in different directions. Put the spool cap on. 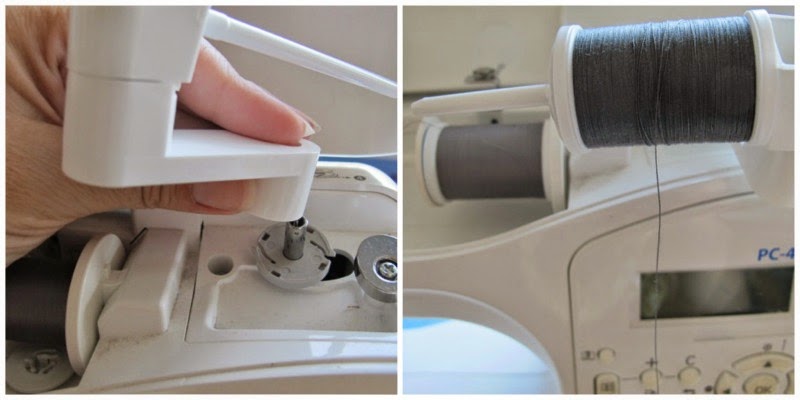 Step 7 already! Thread the machine with your extra spool thread just as you did the regular top thread EXCEPT, skip the needle bar thread hook (not sure why, going to just follow this one like a sheep though. Baa.) and thread the end through the right needle. You can see the needle bar hook just above the green part of the double needle, with left thread beneath it and right thread bypassing it. On some machines (the Brother manual does not mention it) you’ll want to be sure the two threads go one to the left and one to the right of the tension disk. 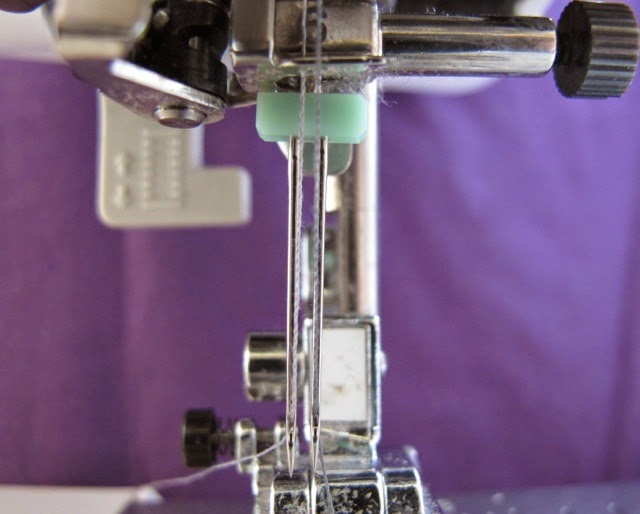 Computerized machines will vary, but I followed the instructions in the manual for scrolling through options and finding the machine’s twin needle setting, which looks like two little needles, and you can see it in the lower left of my screen. For a non-computerized machine, you’d just use center needle position, and stitch width and length as recommended by your machine’s manual and pattern. 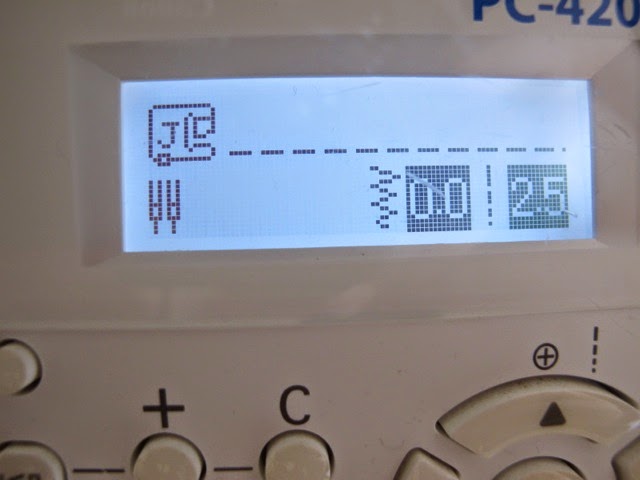 Momentary panic set in when I looked at the stitches shown in the manual and they were all decorative and though lovely, I just wanted straight stitch.

Then it dawned on me.

I chose my sweet and familiar friend straight stitch, lengthened it just a little, and  – deep breath – began to sew on my real and actual project. 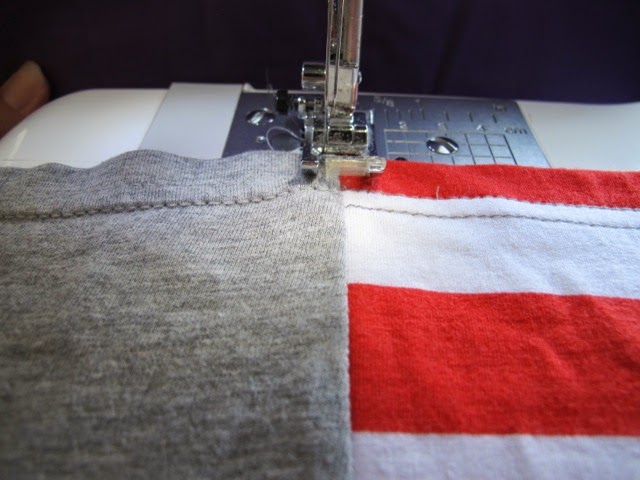 A little wavy but not too bad. 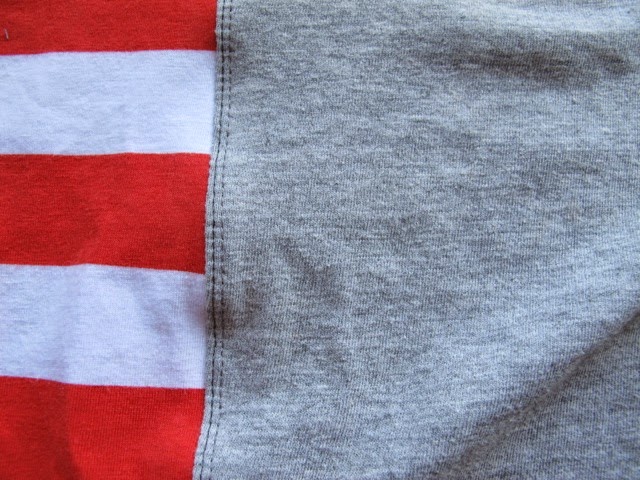 After pressing, much better (left). And a great little stretchy lightning bolt on the reverse (right). 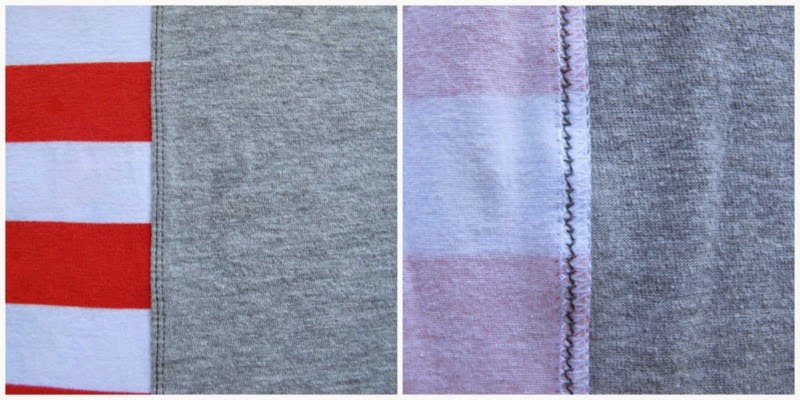 For the next row of twin stitches (horizontal in the photo), I troubleshot the waviness by reducing the pressure of the presser foot just a touch, and I also used a little piece of stabilizer when I started the row of stitching. 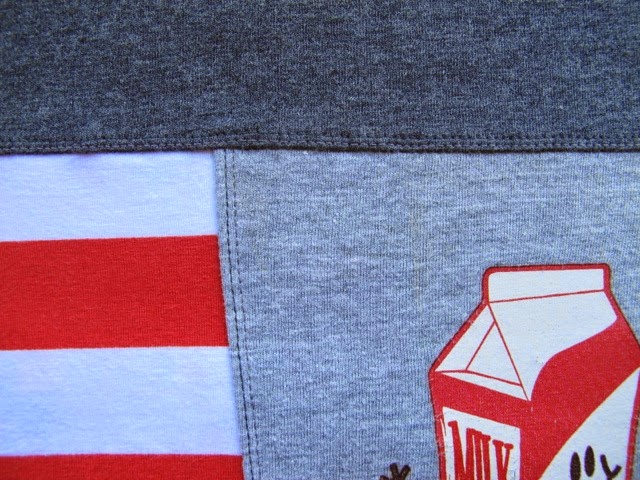 I might like to tinker with it a bit more, but the point of all of this is, it’s ridiculously easy and nothing to be afraid of. Get out your own prongy thing and give it a try!